It’s been a while since I made the move to Skype for handling all of my business calls. There have always been problems with Skype for business use, including confusing billing and an abysmal management interface, but the removal of custom voicemail greetings was the last straw. Tomorrow my number is being ported to Vonage.

The most important thing to migrate over from Skype is my contacts. I’ve got years of phone numbers saved that I don’t want to have to re-enter. One would think this would be an easy process. After all, Skype does include the ability to backup contacts to a file, but this ended up exporting less than half of my contacts.

When people call my phone number, which is setup through Skype, I see their number in caller ID. Then I rename it to their personal or company name for future use. Apparently, Skype doesn’t consider these to be “contacts”, and doesn’t include them in the export. This also explains why those contacts don’t appear in the web version of Skype or on other devices I sign in to. I think it’s a huge oversight.

Digging a little deeper, I found that Skype uses a SQLite database to store much of its data, including contacts. Inside of the database there is a Contacts table and in there are all of your contacts, including those assigned to phone numbers.

Exporting them is simple once you know how to go about it. Here’s an easy and free way to export all of your Skype contacts:

That’s it! You now have all of your Skype contacts in a file format you can actually use. It’s not very clean, so you’ll have to spend some time formatting it for another system, but at least you have what you need. 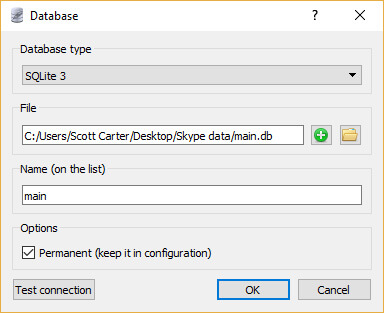