The first five episodes of Serial were wonderful. Well researched, produced and told by its creator, Sarah Koenig, the story followed an arc that lead the listener deeper and deeper into a mystery that seemed to be heading towards a conclusion. Instead, the story meandered for seven more episodes as the clearly obsessed Koenig tried desperately to justify her infatuation with the subject, Adnan Syed. 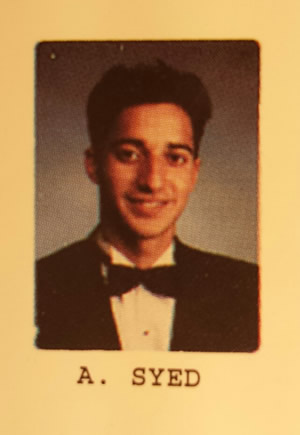 Adnan Syed in a 1999 yearbook photo

Koenig employs every possible tactic to convince herself and her audience that she isn’t wasting our time. She hires a detective to be sure that she isn’t missing something; he says the case work was above average, that the detectives did their jobs well. She interviews a lawyer whose job it is to free innocent prisoners and who, to no ones surprise, finds some way to get involved in the now massively popular case. She wants to test the DNA on items possibly still in storage that everyone has known about for years but no one, not even Adnan himself, has ever asked to have tested before now. In Episode 11, aptly titled “Rumors” and by far the worst in the series, a psychologist is interviewed to determine if Adnan is crazy but that’s meaningless since no direct analysis could be done. It’s about as useful as telling the doctor your foot hurts and asking him to diagnose it over the phone. At one point Koenig even asks the detective if in any of his hundreds of cases he had seen someone lie for years and become convinced of their innocence. He had not.

What’s clear, and perhaps the only thing that is completely evident after listening to every episode, is that Koenig was charmed by and became obsessed with Adnan Syed. Their last phone calls, played in Episode 12, sound more like conversations between lovers than a reporter and a subject. Koenig desperately tries to get Adnan to say something, anything, that might prove him innocent, as she has many times in the past. Just as in all of the previous conversations he has nothing more to say and rather than letting go and admitting that the person that she is trying so hard to vindicate has given up on his own freedom long ago, Koenig continues pushing forward with the idea that a man who doesn’t seem interested in proving his own innocence still deserves to be proven innocent.

So, after twelve episodes of Serial what did we learn? Not much more than you could have found out by reading the news coverage of the trial at the time. Was the case bullet proof? No. Is Adnan Syed guilty? Maybe. Should Koenig have ended Serial at episode six instead of twelve? Definitely.