For years I’ve been using Skype for my business telephone system. Although it’s never been perfect – the admin interface is atrocious and reliability is a problem – Skype is simple, cheap, and has all of the features I need. Well, it did have everything, until they inexplicably decided to axe custom voicemail greetings. Without the ability to have professional voicemail greetings for when customers can’t reach someone, Skype can’t really be considered a proper solution for businesses.

I did a bit of research and asked around for better solutions. My needs are simple: I’m looking for a good softphone, an easy to use admin interface, the ability to import my contacts from Skype, and I need to be able to port my phone number. I came up with three companies that seemed to meet my requirements: Vonage, Jive, and 8×8. Although they all advertise different pricing, each ended up being around $50 per month in the end.

Of the three companies I looked at, Vonage had by far the best website. Things are clearly explained and relatively easy to understand. Their pricing is straightforward, too. They had all of the features I was looking for, so I setup a call and signed up.

I wanted to go ahead and get off of Skype right away, so I ported a number to Vonage and bravely dove in. That was a huge mistake. Almost immediately it became clear that Vonage is more style than substance.

First off, they don’t actually have a true standalone softphone, despite calling their software Vonage Desktop Connect. It’s actually a background service that enables the software to run in a browser. There are a number of issues with this approach. I don’t know about you, but I run a ton of tabs in a browser at once. This makes finding the Vonage tab time consuming when a call comes in. You can enable desktop notifications, but they don’t work reliably. The software runs painfully slowly in Firefox and there is a known bug that breaks the connection between your computer and Vonage if you computer goes into sleep mode. You can’t receive or make calls until you reboot. Seriously.

Desktop Connect has a universal search bar, theoretically making it easier to find contacts, voicemail, or call histories, but because each of those is on a separate page and the search filter doesn’t clear when you switch between them, in practice it’s just an annoyance that doesn’t make your life any easier. Every time you search for a contact to call, you have to manually clear it to be able to see anything else other than items pertaining to that contact.

The list of issues with Desktop Connect is truly massive. Here are some of the most frustrating:

Vonage has a new and a legacy interface for management and it’s cumbersome, to say the least. Tech support immediately sends you to the legacy system, where more functionality exists, but all of the Desktop Connect docs and interface options send you to the new system. It’s just sloppy and frustrating.

It’s fairly simple to port your number, but it can take up to a week for the previous vendor to release it. Three weeks after porting my number from Skype to Vonage, some calls were still going to Skype.

Other issues with Vonage include:

On paper, Vonage looks great. In use, it’s a nightmare. Essential features of a phone system, like call time tracking, don’t work. The web interface is slow and poorly implemented. They have two separate admin interfaces that essentially do the same things. Support is quick to blame your router when the list of routers they approve of is ridiculously small. At one point they suggested I purchase one of their pre-configured routers and connect it outside of my primary router, essentially creating a network with two hardware routers just so I could use Vonage. Don’t waste your time and money.

I was excited to try Jive because, unlike other companies, they include all of their features at a low monthly rate. Simple! I filled in the contact form and sent over my list of needs and wants for them to review and get back to me. They followed up with an Email saying they were taking a look at the list. After not hearing anything for five days, I asked for an update. Apparently, there is only one person in the company who could answer all of those questions and he was busy, so I never heard back on the list.

I spoke to sales rep on the phone and he offered me a free month to try Jive, so I went ahead and signed up. Within two hours I had canceled my account.

Jive said they have a desktop app, but it’s actually a very poorly rated Chrome extension that hasn’t been updated since July. You can’t even make phone calls with it; the software just forwards calls to your desktop phone or Jive Web. This isn’t mentioned on the Jive Desktop product page at all, and only briefly in the documentation. Requiring one app to use another is ridiculous.

During the setup process, when I couldn’t find where to download the app, I got on live chat with someone who told me there wasn’t a desktop app. When I told him the sales rep just told me there was, he checked and found that there was indeed a desktop app, and linked me to the Chrome extension. It seems that even Jive’s employees aren’t sure if they have an app and don’t seem to know the difference between a true desktop app and a Chrome extension.

Another red flag is the extremely poor ratings for the Jive Communications mobile app and the obvious attempt to bury it by releasing another app, Jive Mobile. Parts of their admin interface require Flash, which could be a problem depending on your operating system or browser.

With its overly simplistic web interface, Chrome extension that’s essentially useless, and poorly rated mobile apps, Jive has a long way to go before it can be considered a top-tier provider.

Three days after creating and canceling my account, someone called to tell me I had an open implementation ticket and to tell me to call back later when I could proceed. I politely reminded them that my account had been canceled. Six days later, I received an Email notifying me that a ticket was open and I should call in to implement my (still canceled) account. Jive, you’re a hot mess.

After going through a rough experience with Vonage and a laughable one with Jive, I was getting frustrated and wondering if there was such a thing as a professional, well-run cloud-based VoIP company. 8×8 has been around for a while and has a strong foothold in the cloud VoIP market, so they looked like a good option. I sent in a quote request and soon heard back from a salesman. He informed me that everything I was looking for was available in their system, and although it took about a week to go from first contact to being signed up, I decided to give 8×8 a try.

On the phone during signup, the rep told me I should receive a call to assist with implementation within 24 hours. A support case was created, but no one ever contacted me. I forged ahead on my own and was able to get things setup without too much trouble, except for importing my contacts.

Contrary to their documentation, new accounts can’t import contacts; the only option is to import via a Microsoft Office 365 account. Not Google, Lync, or standalone Outlook, as mentioned in the documentation. Not a custom CSV file as one would assume. An Outlook.com account won’t work, either. It has to be an Office 365 Enterprise account (free trial here). It took days of calling and Emailing to get this answer because tech support never seems to understand that newer customers don’t have access to the “legacy” interfaces allowing them to use all of the import options. The mobile app can access your phone’s contacts, but can’t import them into your account. 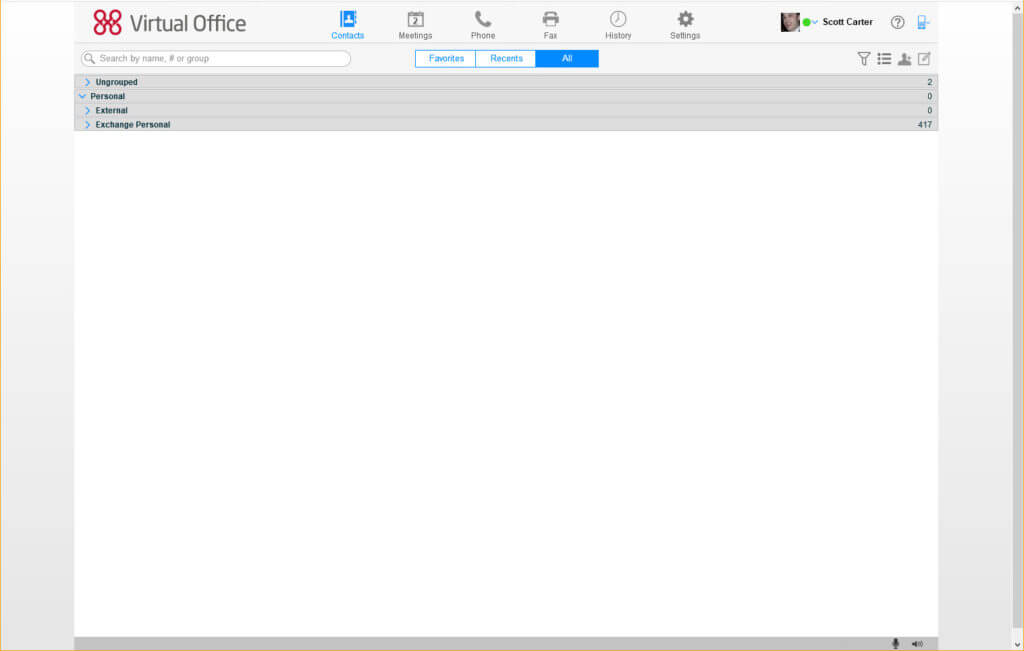 After spending an hour setting up Office 365, waiting for it to provision (sigh, Microsoft), and then setting up Outlook on my computer so I could import in my contacts, I was finally able to connect 8×8 to Office 365 and import my contacts. However, this resulted in those contacts being grouped under “Exchange Personal”, which is not accessible outside of this specific page in the web interface.

A call in to support about the issue yielded no help. In fact, tech support can’t usually even find my account. Just about every time I’ve called, they can’t look me up by my 8×8 phone number so I have to spend five minutes proving I exist.

Want to avoid the phone-based support and simply open a ticket online? Newly opened support tickets are sent out to “community experts” who can see anything you post; it doesn’t warn you about this. They aren’t 8×8 employees; they are just random people who have offered to provide assistance for some kind of kickback. After you get a response from a community member you can select to have an 8×8 employee respond, but a week later no one had. I sent an Email to my sales rep, whose last Email to me ended in “Have fun with it”, which should have been a red flag, that went unanswered for six days before my repeated requests for a reply finally induced the long-awaited implementation call. During that call, I broached the subject of the contact importing. The employee had no solution and said he would get back to me the next day, but never did. It wasn’t until I was finally escalated to a Tier 2 tech that I got confirmation that there was currently no way for new customers to import their contacts.

Finally, after going through two companies who say they have a real softphone but don’t, 8×8 delivers a true, stand-alone software application that you will actually enjoy using. It starts with Windows, automatically logs in, and gets a lot of other little things right. You can use your keyword to enter numbers or search for contacts. You can independently control the app’s volume. Even the included remote meeting software isn’t half bad. It’s simple, it works, and it makes sense.

Things went smoothly with porting my number from Vonage to 8×8. It took about a week, occurred right on schedule, and functioned properly right away. So far, I haven’t missed any calls that I’m aware of.

Despite the sketchy support system, inept Tier 1 agents, and inability to import my contacts, I decided to stay with 8×8. They have by far the best softphone app of any I’ve tried and the service has been rock solid since I got it up and running. They also happen to be the cheapest of the three services, and they include free Internet-enabled faxing that seems to work just fine along with a decent remote meeting tool built into the 8×8 Virtual Office app. After canceling the three services it replaces, 8×8 actually comes out cheaper while providing as-good or better functionality in all areas. I’m hopeful that they will continue to improve their customer service and have been promised the contact import feature will be added in the next few weeks.